This was posted in June last year but I actually made my walk to Finisterre and my Camino ended on 23rd May, a very poignant day for me and it was lovely to do something so productive.

As I woke up in Cee, I could already feel my body was more relaxed than other days and that’s no doubt due to knowing that this was the day I would end my pilgrimage in Finisterre.

I took my time eating breakfast and getting ready to start walking as after all I only had 12km left before I reached Finisterre. After that there would be a 6.4km round trip to the lighthouse awaiting me.

Leaving Cee was more difficult than I had previously thought, both in following the arrows and also in literally leaving the sea. Most places had been easy to leave as the arrows, markers or other signs are most definitely there ready to help you, however for some reason they weren’t so obvious in Cee. I thought maybe it was me not looking properly as I didn’t really want the pilgrimage to end, however when I had a coffee later with a fellow pilgrim he also shared how he had struggled to see if he was on the right route. Leaving the water was also difficult for me although I knew that most of this final stretch would be along the beach and the sea so I wouldn’t be leaving it for that long. As I stopped at the side of the water to do a meditation, I was pushed along by a local telling me that no I had taken the wrong turn and should be going up the road rather than along the water. Naturally, I continued on my way to reassure him he didn’t need to worry about me.

I took my coffee in Corcubion, a sister town to Cee which allowed me to admire the sea view as I drank and reflected on my pilgrimage so far and how I wanted to feel as I arrived at the lighthouse.

The next stage of the walk takes you away from the sea as you climb up to a different path.

It wasn’t long before we came across a restaurant with a perfect view of the beach and the sea and therefore the perfect coffee and bathroom stop. Seeing as this was a short walk I was also happy to take my time and really enjoy everything I experienced and saw along the way.

From here on the sea was never too far from us and the scenery turned more into a holiday scene. Once again my thoughts went to previous pilgrims who had walked this path and wondered how they had felt at this moment knowing it would all soon be over. Would they also feel like they were on holiday as they got to this point as I imagine this landscape was different to where most pilgrims lived. I had lunch along the beach in Anchoa where I also decided would be the point for me to run into the water and maybe if I was feeling brave I would put my head under the water. Well, it was freezing so I felt that walking into it was enough. 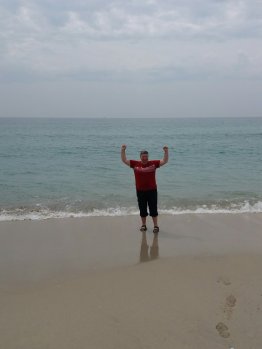 This beach stretches on for 2km before arriving in Finisterre. Stinking of saltwater, I was happy to quickly grab a shower and a change of clothes at my accommodation before heading off to the lighthouse with another pilgrim.

Before starting towards the lighthouse, I asked myself again if there was anything I would want to burn at the end of the world. No, there wasn’t anything but I had another plan which you’ll see later. The walk to the lighthouse is longer than I thought it would be so I was glad I had left my bag at the accommodation. As we walked up we were passed by many pilgrims making the return journey towards Finisterre where they would either stay or continue on to Muxia. I found this walk quite emotional, not so much because this marked the ending of my pilgrimage but more so because at this point you notice just how many people have made this journey as pilgrims pass you constantly along the way. In Santiago, you don’t necessarily know if pilgrims have already been to the cathedral or to get their certificate or are on their way.

I had already made the decision to leave my hat behind so had agreed with my fellow pilgrim that if we found a statue along the way, I would leave my hat with them. The hat had accompanied me the whole way protecting me from the sun and the rain but for many personal reasons linked to the hat, it was time for it to leave me. If someone else wanted it then great they could always take it from the stat as it went with my blessing.

This great statue of a female pilgrim leaning into the wind as she makes her way to the lighthouse provided a perfect resting place for my hat we thought.

I like to think my hat kept her warmer but also there was something relaxing and uplifting in passing it on with all the thoughts, concerns and hopes I had carried along with me attached to it. I no longer needed to carry any of them or link myself to the person who had carried them along. It was almost like having a 2nd Cruz Ferro moment.

Next stop would be the 0.00km marker signalling the proper end of my pilgrimage as I had reached the end of the earth, there was nowhere else to walk. Although, that’s not quite true as you can walk out past the lighthouse and onto the stones where some would burn their belongings.

Here I am after 7 weeks of walking actually believing I can either bend down or rest on my knees and get to the same level as the 0.00km marker. No chance lovey! After 7 weeks those knees aren’t going to do that! 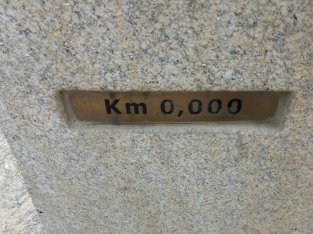 What a moment! I made it! Woohoo and yes here I felt more of those wonderful emotions and sense of achievement than I did on reaching Santiago. This was the true end to my pilgrimage and I felt it in a really positive way.

So onto the end of the earth, let’s go!

A coffee and a chat looking out to sea was called for and a peaceful end to 7 weeks of walking. Onto the descent and collecting another certificate for this stage of the Camino. 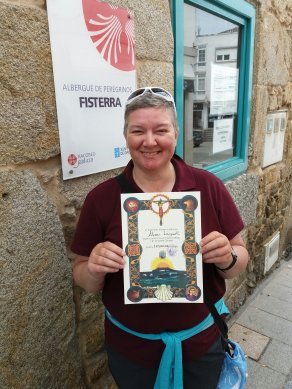 Now I’m not someone who needs a certificate for these sorts of things especially as the experience is more important than the piece of paper. That certificate does not reflect any of my journey just as my Santiago one doesn’t. However, it’s the done thing and as I have been a sheep and followed signs, arrows and other people along the way then Yes, I would also follow the rules and collect my certificates. I doubt they will ever be shown to others apart from in the photo as that part certainly isn’t who I am.

On to the next part of marking the end of my pilgrimage and the shaving of my hair again. I had my long hair shaved off ahead of leaving for France however I knew that I would need to fo it again to mark that the pilgrim who leaves is different to the one who starts and therefore the hair which had grown along the way had to go.

That evening, I had dinner with 2 other pilgrims I had shared most of the last 4 days with and we went to the beach afterwards to take part in another end of pilgrimage ritual. The setting of the sun at Finisterre is a fitting ending of the journey and the beach provide a great setting to think of the onward journey and what our transition into the real world may look like. Reflect on all those experiences, offer thanks for the friendships made and the shared moments whilst preparing for the new day.

So my pilgrimage ended that night. Although, I had already booked for another night in Finisterre knowing that I would want a whole day to explore it properly and relax a little at the end of my pilgrimage, I always knew that my pilgrimage did end on that day of arrival in Finisterre. 23rd May is also a poignant day for me each year but this year it was marked in a very special way.

I’ll post more on Finisterre and Santiago next time. Until then buen Camino!

Published by being the best you can be

Bringing together all 4 blogs under the one name, here you will find travel posts, Alison's travel updates from her 40 countries in her 40s challenge, book reviews and authors' interviews which also reach out to all corners of the world and communities who don't have access to the internet as much as others may do. You'll also find features on ordinary people's lives in our sections 'Ordinary people living extraordinary lives' and more recently 'A Day in the life.... during lockdown'. Hope you enjoy! View all posts by being the best you can be